Lightspeed To Babylon by J.Y. Jones 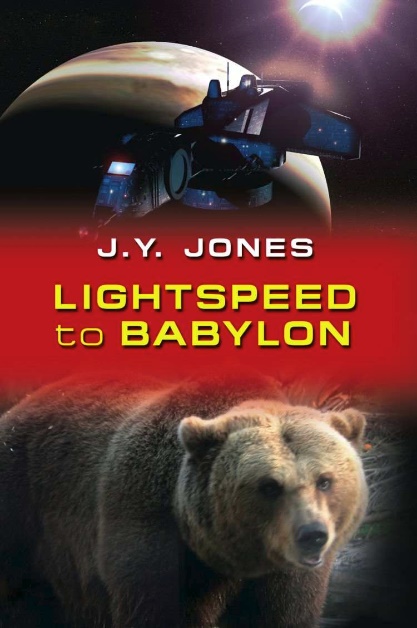 Have you ever wondered what would happen to the world if radical animal rights groups were given everything they wanted? Can't happen, you say? There is increasing evidence that it can indeed happen, and that, in fact, Biblical prophecy indicates that it very well may happen! Lightspeed to Babylon is an end-times novel and a science fiction tale, but it is distinctly different from any other. Conflict between man's science and the God of the Bible is the overarching theme, and this permeates the plot. The principle character is Buck Morgan, a boy who grows up on a futuristic Kansas farm in the middle of the twenty-first century, when science, progress, and productivity are at a zenith. Despite early childhood trauma caused by the death of his mother in a wild animal attack, Buck Morgan excels academically, attends West Point, becomes a renowned astronaut and test pilot, and ultimately becomes the first man to approach closely to light speed (some 75 years in the future). Despite his personal fame and astounding scientific advancement by mankind, his world is one where morality, integrity, and aspirations of high achievement are slowly eroding away. While he is away in space on mankind's first mission to another star, 90 years of earth time passes while Buck Morgan experiences a time lapse of only nine years, a phenomenon that results from a well-known quirk in relativity physics. He leaves behind a world of exemplary stewardship of natural resources, and a world where science is the reigning god. It is projected during the first half of the book (before the long space journey begins) that both the animal rights movement and evangelical Christianity have been mostly discredited in public life. What Buck Morgan encounters on his return from space is a complete and unexpected victory by a resurrected animal rights movement. There is intense conflict between the hero and a ruling new world order, a love story from out of the past, a world unexpectedly at war, a daring rescue. There are numerous other action chapters. Woven into the fabric of the book are several important elements. Christians and Jews are still present and prominent, but their influence has ebbed severely since the twentieth century. The animal rights movement is likewise but a remnant in the first half of the book, but it revives with a vengeance in the last part. Another feature is how a takeover of the world by the animal rights movement in latter times meshes well with prophecies from the Book of Revelation, particularly as regards the predicted antichrist. There are also some scenarios portrayed by which advanced scientific progress, particularly in space, provides fulfillment of certain end-times prophecies. During Buck Morgan's absence from Earth, regular flashes to the traveling spaceman occur, and his progressive, optimistic thinking provides a distinct contrast to what is actually occurring back on his home planet. Because of the confusing nature of the time dilation phenomenon mentioned above, each chapter opens by stating the date it begins.

" It did not appear to be wild and savage outside. It looked wonderfully tranquil, the view down a winding country road towards low hills that were colored tan by an early killing frost. The western sky was pink with afterglow from the setting sun, an image stained only by dark wisps of cloud that banded the heavens. Venus, a gleaming gemstone in the twilight, dominated the horizon in its nearest approach to sister Earth. The scene beckoned irresistibly.

It was time for Alice Morgan to take her usual stroll, a ritual she had begun several years before as a means of staying fit. Rugged Kansas flint hills formed a dark palisade to the west, the escarpment dramatically backlit by the brilliant sunset. She momentarily gazed at the stark outlines of leafless trees against the panorama. S She left her kitchen door slightly ajar and descended several low steps to an irregular gravel driveway. View full excerpt"

Other Books By J.Y. Jones